According to an article in the Daily Mail, the UK's best-selling tobacco company was accused of sidestepping a ban on the sale of menthol cigarettes. The new ban on selling menthol cigarettes was brought in primarily to stop children smoking. 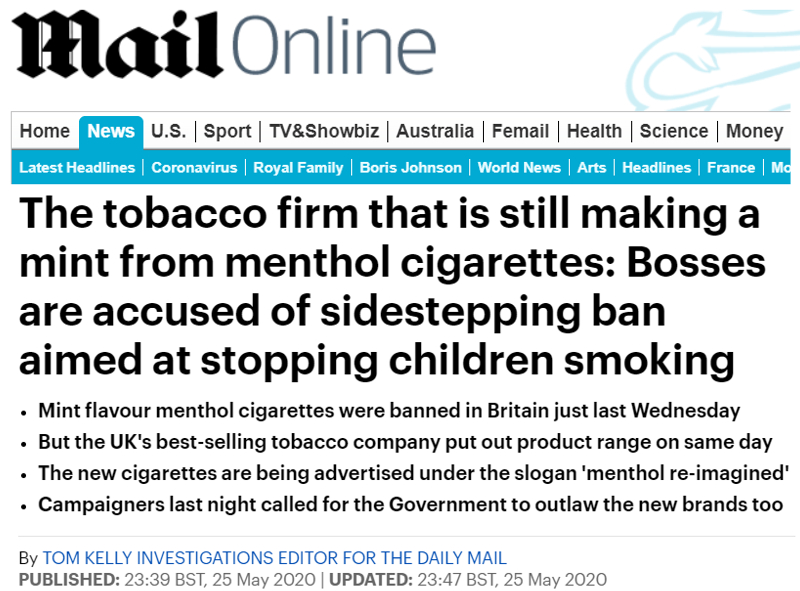 
It's about time Menthol cigarettes were banned. At Stepbac we support this 100% and condemn any companies trying to get around it.

Not only do kids think that menthol cigarettes are safer to smoke than ordinary cigarettes, which is not true at all, but many adult smokers over the years have swtiched to menthol after being tricked into thinking they were safer too, including our own father.

"Stepbac from Smoking" is the first book in the Stepbac series and we dedicated it to our grandfather who died of lung cancer and our father who had a severe stroke from smoking.

At the time of our father's stroke, he had been smoking menthol cigarettes for a few years, believing that they were healthier.

So at Stepbac, we welcome all new bans and restrictions on smoking of any kind.

If cigarettes were banned completely and we never sold or gave away another edition of Stepbac from Smoking we'd be over the moon with joy!

Smoking is has no benefit. Smokers have all been tricked into smoking, often when they were children or teens.

Smokers are tricked into thinking that they get some benefit from smoking, but as we clearly show in our book, these "benefits" are fake sensations caused by the drug nicotine in cigarettes and e-cigarettes.

The more bans the better if it saves lives and misery for people.

Thank you for reading.